A quiet Sunday? Not a chance! This game had everything: At the end of this highly competitive and thoroughly thrilling home fixture, SVWW held onto the three points on the 23rd match day of the 3rd Liga! Phillip Tietz with a dream goal (45’) and the two substitutes Moritz Kuhn (87’) and Gustaf Nilsson (90’+3) scored in a well-deserved win over Türkgücü München. Tim Boss managed to save the first penalty taken by the guests.  Their second penalty was converted by Sercan Sararer to equalise (82’).

After the 1:0 away win at 1. FC Kaiserslautern, SVWW manager, Rüdiger Rehm, put his trust in the same starting XI. Maurice Malone and Gustaf Nilsson came back into the squad, offering two additional attacking options for the Red and Blacks.

Both teams started off with great spirit and good pace moving forward. There was little sign of a “wait and see” approach, and the agile and enthusiastic attacking lines kept their defending opponents busy. The Red and Blacks moved the ball around smoothly right from the start and the first big chance wasn’t long in coming: Lucas Brumme and Dominik Prokop combined well through the opponents’ half of the pitch, passing to Jakov Medic, who once again started the game as a converted striker beside Phillip Tietz. However, the shot by Medic missed the Türkgücü goal by centimetres (5’).

SVWW continued to move well in attack and to apply pressure along the right wing, where Marvin Ajani picked up the pace time and again. When in possession, Türkgücü relied upon a patient build up and also didn’t wait long to put their attacking mark on the game. Yiyoung Park passed to Petar Sliskovic from the right, but Tim Boss was standing guard (11’).

After that, the Red and Blacks gained the upper hand again. Ajani made life difficult for the Munich defence time and again and after 13 minutes of play he got past TGM keeper, René Vollath, but the goalpost stopped the hosts going into the lead. Then almost minute for minute, SVWW had an opportunity to go into the lead. Medic took a shot after a solo run but couldn’t get past Vollath. And Brumme’s stretched shot following a Kempe cross whizzed just past the Munich goal (14’).

While Türkgücü attempted to get back into things with their own passing game, the Red and Blacks even worked really well when dropping back, and they left the guests not an inch of space to manoeuvre. At the other end of the pitch, the hosts were still having no luck with that final shot. Brumme and Prokop took off again, creating the next mega chance for SVWW. Brumme crossed the ball just in front of the TGM keeper Vollath who had come out of his goal, but his Austrian colleague hesitated a second too long, placed the ball once again at his right foot, and hammered it against the crossbar – no change at 0:0 (21’).

A goal putting SVWW into the lead would have been more than deserved at this stage, but the Rehm XI didn’t give up. After a good half an hour, SVWW hammered the ball in from all positions but it still didn’t want to go into that net. One good combination followed another but both Kempe and Tietz brushed the ball just past the Munich goal (31’).

Türkgücü then showed signs of life in a set piece. Sliskovic, the most conspicuous attacking player, headed a Sararer free kick towards the SVWW goal – not a problem for keeper Boss. Shortly before the break, Malone came on for the injured Prokop. And, just as it seemed that both teams had accepted that they would go into the break with a clean sheet, the ball was suddenly in the Munich net. After a pass from the recently substituted Malone, Phillip Tietz positioned the ball about 30 metres from the goal, wasn’t challenged and hammered it into the top corner of the net – what a goal (45’+1).

The second half started off less briskly than the first. While the Red and Blacks continued to have more possession, the first shot on goal came from the guests. But, Boss had no problem dealing with the flat shot from the substituted Furkan Kircicek (55’). The team from Munich were now settling into their game. Their phases of possession were longer and SVWW was no longer as compelling in attack or as assertive when challenging for the ball. Almost an hour had been played when Kempe brought down Sliskovic in the SVWW box resulting in a penalty. The fouled player took the penalty himself, but yet again it was impossible to get past Tim Boss. The SVWW keeper moved like lightning to the left corner and managed to tip away the strong shot for a corner – still 1:0 (60’).

Both teams were now locked in an intense match, not giving an inch on what was now a very battered pitch. This affected the flow of the game to an extent and initially there were no top-class goal opportunities. Nonetheless, the guests continued to play with energy and managed to get into dangerous spaces mainly through set pieces.

It took a while for SVWW to get back to their more defined line of play from the first half. It wasn’t until about 20 minutes before the end that the hosts put their mark on the game again and attempted to make better use of the space freed up by the Munich team moving forward in attack. In the final phase, substituted Kevin Lankford was a danger time and again along the right wing. He looked for Brumme at the far post who missed the 2:0 by millimetres (79’).

At the other end of the field, Boss hat to stretch full length to tip a Sararer shot around the post for a corner, before referee Lars Erbst once again pointed to the spot (81’). While carrying out a sliding tackle, the ball bounced and hit Ajani’s arm, so Türkgücü had another chance to equalise from a penalty. This time Sararer took on Boss, who chose the right corner but couldn’t hold on to the lead (82’).

Rüdiger Rehm now threw every man forward and brought on new energy in Gustaf Nilsson and Moritz Kuhn in order to make sure that they got those three points. And, Rehm showed that he has the Midas’ touch! Kuhn got straight into things going forward with a sharp cross from Lankford and didn’t hesitate. TGM keeper, Vollath, could only watch as Kuhn’s cracker of a shot flew past and into the net to put SVWW into the lead again (87’).

The guests now threw everyone forward, of course. Only seconds after play resumed, Florian Carstens had to prevent a TGM attack. Having already seen a yellow card, this giant defender had to leave the pitch early on being shown a second yellow (88’). It was Gustaf Nilsson, however, who put the finishing touches to what was a thrilling final phase. The second Rehm substitute prevailed in a robust challenge from Filip Kusic and netted a flat shot to make it the final score of 3:1 (90’+3). 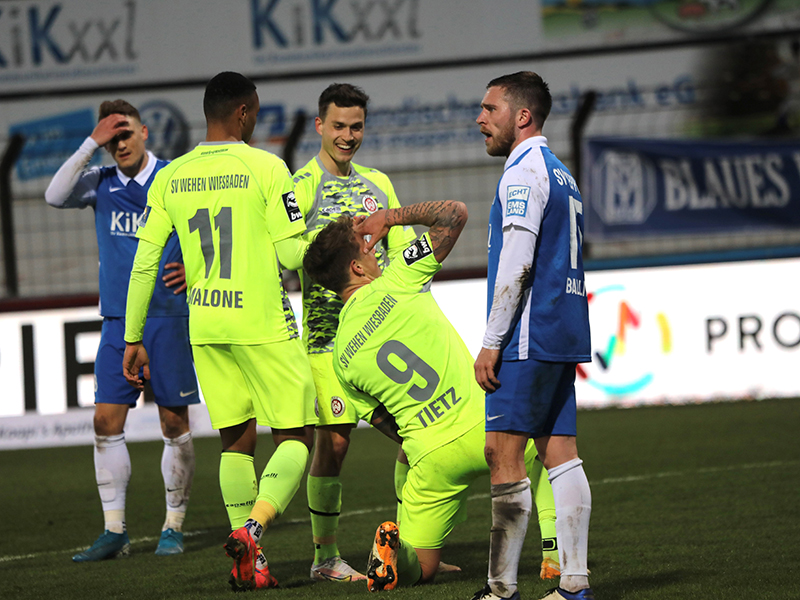 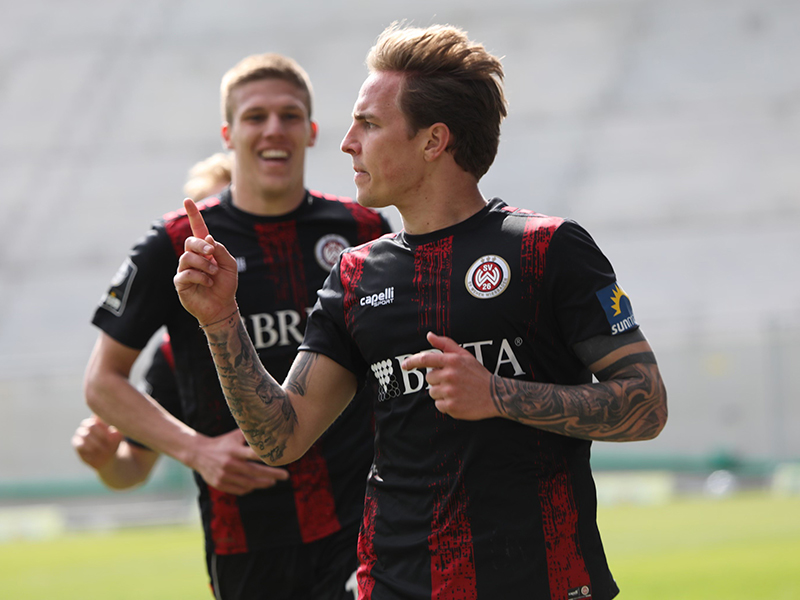 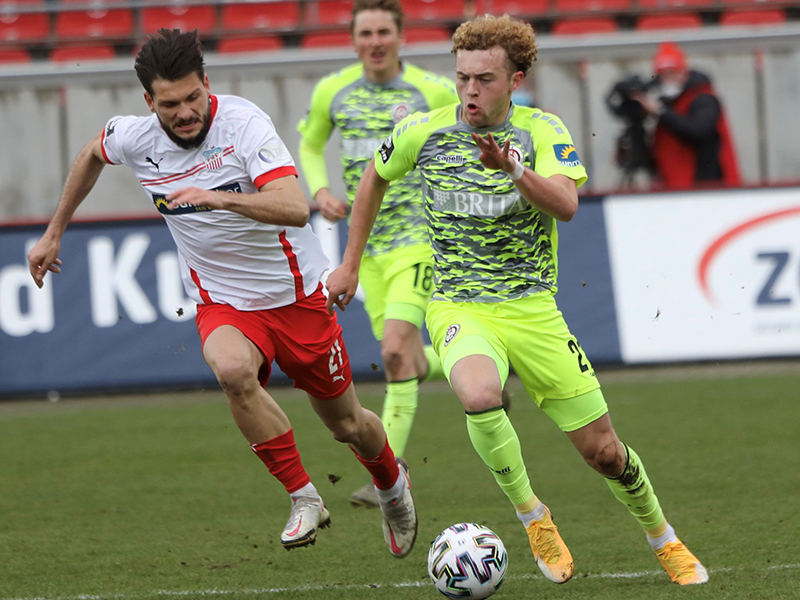 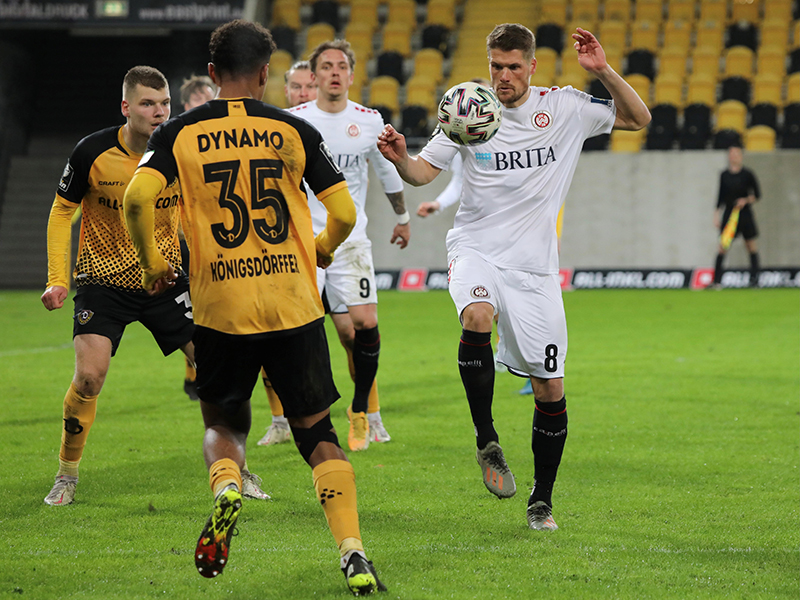