SV Wehen Wiesbaden lost its away fixture 1:2 (1:0) to FSV Zwickau on the 29th match day of the 3rd Liga. Benedict Hollerbach put the Red and Blacks into the lead (45’+1) on deep grass. A strong Zwickau team turned the game around in the second half and a late goal gave them the win.

Zwickau started wide awake and with a fighting spirit. The “swans” disrupted the SVWW game build-up right from the start with early pressing, resulting in a difficult initial phase for the guests. By winning the ball in the SWVV half, Zwickau promptly had two good opportunities. But, Tim Boss in the guest goal was on the spot both times to stop ex-SVWW player, Ronny König (5’).

After a short settling in period in what was a lively game on slippery ground, both teams looked to move forward without compromise. Benedict Hollerbach gave off the first warning shot towards Matti Kamenz in the Zwickau goal (7’), and at the other end of the pitch König and Nils Miatke tested Boss with a side volley and a volley shot (12’/13’).

Zwickau now took off like a fire engine. By pressing deep and repeatedly winning the ball back along the wings, one cross after another sailed into the centre. Even though the guests were having difficulty with this very targeted attacking game, Boss, Paterson Chato and Sascha Mockenhaupt on the line avoid conceding a goal on a number of occasions (14’).

The Red and Blacks had a number of good opportunities despite Zwickau having the edge. After a sharp pass into the centre by Hollerbach, Gustaf Nilsson had the lead at his feet but Kamenz saved the 0:0 with a strong reflex reaction (18’).

SVWW now opened up, took over the game and were better able to build up their own game.  Kempe sought out Wurtz with a cross, who was so disrupted by Can Coskun in an aerial battle that he couldn’t quite head the ball (24’). Zwickau waited for a chance to win back the ball, which was then converted like lightning into a counter attack. Boss even came out the winner after a volley shot by Mike Könnecke from 14 metres (26’).

The game continued to ebb and flow and there was little between the two teams. They both managed time and again to get into a goal scoring position, but up to this, none of the shots was converted into a goal.

Before half time, Hollerbach, again from a distance, and SVWW captain Sebastian Mrowca, following a subsequent corner, had the biggest goal opportunities for the guests – but Kamenz was on the spot (41’). Tim Boss distinguished himself once again just before the break. The 27-year-old made a brilliant save to keep a clean sheet. Miatke hammered the ball from 15 metres towards the top corner but the SVWW keeper just about got his fingertips to it to put it over the bar (44’).

It was Benedict Hollerbach who finally put the final touch to an entertaining first half. After winning the ball, Nilsson worked his way up to the baseline, and took advantage of a poor attempt by the FSV defence to clear the ball to coolly put it over the line and his team into the lead before the break (45’+1).

Both teams attempted to move forward during the second half, but the defenders had adjusted to the other strikers at this stage. Therefore, it took a set piece for the first opportunity – and at the same time the equaliser. After a corner by Morris Schröter, Marco Schickora jumped the highest and nodded an unstoppable ball past Boss and into the goal (53’).

Without a break and with great spirit, each team tried to take over and score the next goal. Rehm brought on fresh legs in Kevin Lankford, Tim Walbrecht and Phillip Tietz, after an energy-sapping week with a midweek match.

This was now a game of many one-on-one challenges and during this second half things moved more towards the middle of the field. There were no goal opportunities on either side. Up to the final phase, it seemed that there would be no change, but a flash of inspiration from Schickora gave the “swans” one final chance. After a sharp cross, Schröter popped up in front of the SVWW goal, swerved around Tim Boss and tipped the ball into the net to make it 1:2 from a Red and Black point of view (86’).

The guests threw everyone forward until the closing moments of injury time. Even keeper Boss appeared in the Zwickau box for the final action of the game, but there was no chance of a goal. The score remained at 1:2. 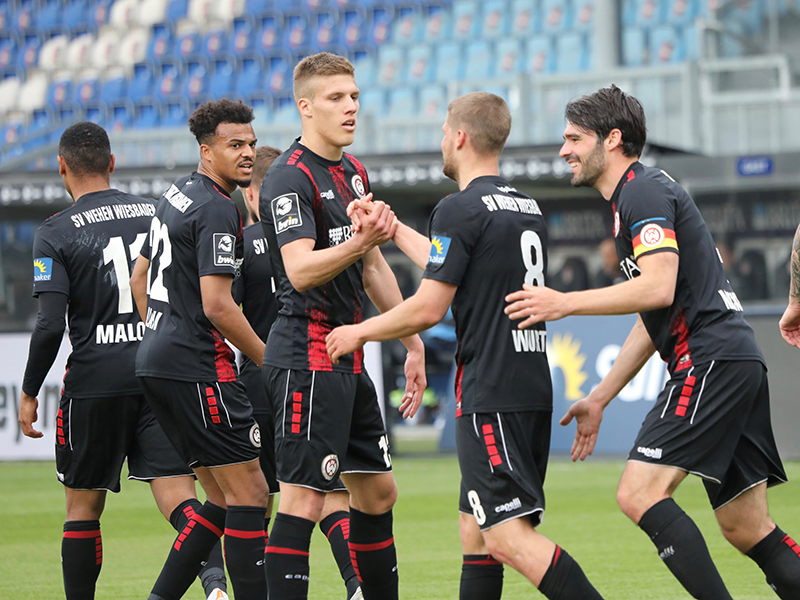